Escapology Myrtle Beach offers a unique experience for guests ages 7 and older. Let's groups choose from 5 different themed game rooms. Each room has varying difficulties that allow guests to work together to find clues, solve puzzles, and pick locks that will free them from the game room before the allotted 60 minutes.

from Escapology Myrtle Beach
Great fun between groups of friends and families. Play in groups of 2-8 and work together to find the clues, solve the puzzles and escape the room!

Challenge yourselves in bigger groups by booking two rooms at the same time and see which group has got what it takes to be the best!

Escapology is a real-life escape game. Groups of up to 8 players are locked in a themed game, and players must work together to find hidden objects, uncover the clues and solve the puzzles to earn their freedom! But can you do it before your 60 minutes are up? Do you have what it takes to Escape?

You are Gerard 'Gerry' Droller, a CIA Field Operative. Your code name is Don Frederico, and you work directly for the President of the United States, J.F. Kennedy. While going over your mission notes, you realize the world is facing a nuclear Armageddon. The Soviet Union, under Premier Nikita Kruschev, has strategically assigned ballistic nuclear missiles to the Cuban territory with approval from the Cuban leader, Fidel Castro. These missiles are located less than 100 miles from the U.S. and are able to reach major cities with only a 4-minute flight time. The atmosphere is extremely tense!

An American spy plane has just been shot down over Cuba, and the President is now under massive pressure from the Pentagon to launch an invasion of Cuba. The President, however, isn’t sure whether the plane was shot down deliberately by the Cubans or the Soviets, or if this was a terrible accident caused by a lowly soldier. If this was indeed an accident, there is no need to go to war, and a peaceful solution may still be possible. If this was a deliberate action, then the President has no choice but to launch a U.S. invasion of Cuba, which could result in a nuclear war.

Your mission is to infiltrate Fidel Castro’s palace, locate the secret KGB office, and find out who was responsible for shooting down the American plane. You are standing outside Castro’s palace waiting to hear that it is empty. You receive the all-clear. Castro’s bodyguards and the KGB are not on the premises. However, having entered the palace, you receive word that Castro and his bodyguards are traveling back towards the palace, and they are only 60 minutes away! You must complete your mission and escape before you are caught! Solve the clues, answer the riddles, find the critical intelligence and get out within the hour. Rely on your intuition, have confidence in your team, and leave no stone unturned! Remember: Your mind is your most powerful weapon, and time is of the essence! Do you have what it takes to complete your mission?

Scooby-Doo and the Spooky Castle Adventure
Can you save your town from disaster?

The town of Crystal Cove and the surrounding areas are being terrorized by monsters and ghosts. The local baroness, Maria Richman, has gone missing, and it is suspected that the ghost sightings have something to do with it!

Upon discovering a secret dungeon and monster lab in the castle, you realize this is where evil is being created and set about solving the crime. You come to the conclusion that the person responsible almost certainly works in the Castle - but who could it be as there are several suspects?


Mansion Murder
Scottish Highlands; New Year’s Eve, 1999
You are Robert Montgomerie, the only remaining direct heir to the Kildermorie Estate and the Montgomerie family fortune. You’re attending a family gathering hosted by your grandfather, Hugh 'Monty’ Montgomerie, the 9th Earl of Kildermorie, to celebrate the dawn of the new Millennium.

As the guests raise a toast, a scream fills the air... Your grandfather is found dead in the library - and it looks like MURDER!

Suddenly, you’re bundled into the drawing room, and the door is locked. Confused, you bang on the door and call for help until it dawns on you... As the direct heir, all fingers are pointed at you! You realize you’ve been framed! But who would want to kill your grandfather… and why?

You overhear the police being called, but know that as the Kildermorie Estate is hidden deep in the Scottish Highlands, it will take them 60 minutes to arrive.

The only evidence that proves your innocence is hidden in the mansion...
For centuries, the Montgomerie family assigned a single gatekeeper to its secret family history. The Earl’s sudden demise means he can no longer pass on these secrets, but the wise old man ensured there was sufficient evidence, hidden throughout the family residence, should anything unexpected happen to him! What he didn’t anticipate was that you’d need to uncover these secrets in only 60 minutes!

Will hidden clues reveal distant family secrets? Can you gather enough evidence and piece the story together to prove your innocence? And the biggest challenge of all... Is it even remotely possible to solve the mystery before the clock strikes 12?

Success means freedom, fortune, and saving the future of your family...
Failure means life behind bars...

Do you have what it takes to find the family killer before you are framed and lose your inheritance? Time is of the essence!

7 Deadly Sins
Crickley Church, 31st October, Present Day...
Difficulty Rating 8.5/10 This room has frightening elements that may not be suitable for children.

In the late 19th century, during an ill-fated Halloween service, the deranged minister of Crickley Church decided to kill his entire congregation after their confessions had convinced his twisted mind that they had, among themselves, committed the 7 Deadly Sins. In order to punish them for their sins, the evil minister passed around poisoned bread and wine.

As the congregation choked on their last breaths, the minister incited a curse on the children playing in the rooms beneath the church, and then buried himself alive in the church’s hidden crypt, determined to haunt the church forever. Your great-grandfather was one of those innocent children. You begin to think back on the mysterious deaths of family members and close friends ever since that fateful night.

Trawling the many ancestry websites to gather your evidence leads to a terrifying conclusion. Every year on Halloween, someone related to a member of the congregation dies an unnatural death. As you study the pattern of these accidents and the people involved, you discover that you are next - and time is running out...

In your panic, you contact the American Paranormal Society, and they tell you that the only way to end the curse is to find the body of the evil minister and drive a sacred dagger through the remnants of his heart. This will lift the curse, and the souls of the victims will finally be able to rest in peace.

Not wishing to take on such a daunting task alone, you have convinced your bravest friends to race to Crickley with you, break into the abandoned church, and find the hidden crypt. You enter the churchyard at 11 pm and the iron gates immediately slam shut behind you, locking you inside. The minister seems to be playing one last trick on you. Can you complete your mission and escape the church before the clock strikes midnight? Or will you fulfill the curse and your name be the next on a headstone in your family’s graveyard plot?

Find the hidden crypt, find the dagger, and drive it through the heart of the evil minister. Then and only then, you will be saved and will destroy the curse forever.


Lost City
South American Jungle, 2015
Archibald Tucker was one of the greatest explorers of the 1930s. His tales of adventure were known the world over, and his prized journal documented every adventure. While exploring an abandoned temple in The Lost City, he uncovered a treasure so rare that no man alive had seen it! A sudden gust of wind slams the temple door shut - sealing Tucker and his journal inside! Both were never seen again.

Your team of treasure hunters decides it’s time to finish Tucker’s quest. Armed with the latest technology, your research points you to the exact whereabouts of the lost journal, which holds the secrets to finding the treasure. You’ve brought all the essential materials for your adventure in your backpack. You approach the temple confidently, but once inside, angry spirits awaken and deem you unworthy of the riches held within.

As a test, they grant you 60 minutes to prove your worth. You must work logically, interact with everything you find, and solve puzzles to uncover the treasure! If you fail, the door will be sealed once more and you will surely perish! Can you locate the journal, find the treasure, and escape the temple before it’s too late? Time is of the essence! 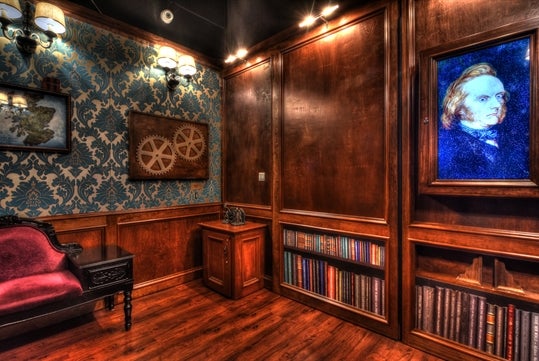 View Map
Back to Top

Is this for all ages?
These games are great for anyone aged 7 to infinity!

Will we play with other groups?
No, we will never place you in a game with another group of strangers. All experiences at Escapology are private!

Who can play the game?
Anyone can play our games in groups of 2-5 players.

Are your games wheelchair accessible?

Yes, we pride ourselves on having totally accessible games. There may be occasional puzzles that require additional assistance, but everyone can play an active part in all aspects of the games in general.

How long will the experience last?
The entire experience will take approximately 1.5 hours, with 1 hour game time.

What skill do I need to play?
No special skills or knowledge must play the games, apart from a decent understanding of English.

May I leave the room in the middle of the game?
It is better for your experience to stay in the game until you escape, although, in an emergency, you can always leave the game.

What if I need help during the game?
You'll be monitored closely via secret surveillance linked directly to your dedicated Game Maser in our Control Room. If you are stuck, you may ask them for help.

May I use my phone or camera in the game rooms?
During the game, we ask that you refrain from using your phones and cameras.

We accept a variety of payment methods for your convenience:

We are here to help:

Don’t take any chances with your trip. Whether you need assistance booking, helpful details for you to be prepared, or need to make a change, our knowledgeable and helpful customer support team is prepared to assist you.

By Phone: 1-877-422-4132
8 AM to 5 PM Central Time 7 days a week
Email Us:
customerservice@tripster.com
Have General Questions? You can view our FAQs for possible quick answers.